Create or Edit a Scenario

Everything related to TWA Automation is located within the TWA database which will be located within the "automation" schema, for example, a table would be labelled as "automation.tablename". Unless specifically instructed here do not change the database schema or data content of this database. Only the areas specified in these docs should be configured as documented.

Existing scenarios can be modified in any of the 4 ways described.

1. Connect to the TWA Database

2. Create a stored procedure, ensure that it has a schema (prefix) of "automation", for example, "automation.spNewScenario"

3. It is important to the whole process, that the stored procedure has to return the following columns

4. Any additional columns which are returned will be supported, but are not a requirement in order to function

1. Parameters are not supported, so do not add these e.g. automation.spNewScenario @Name nvarchar(30)

2. Run the SQL inside of the procedure and test that the data you expect is returned and that no errors occur

3. Use the code below (BotGuestNotifications Scenario) as a guide to writing your own custom scenario:

2. Add the scenario to the list of scenarios in the configuration

Edit the table "automation.Scenarios", adding a new row to define the new scenario.

This table contains the following columns:

By default, the following values should be populated in the table:

3. Defining a new template for the messages sent to users (via Microsoft Teams message)

Template definition is defined in the Azure Table Storage store, in the "ScenarioTemplates" table. This table has the following columns:

If this table does not exist or is completely empty the four default scenarios which mentioned above will still work using hardcoded values.

Templates for existing scenarios can be changed by editing this table, and will take effect the next time the scenario is scheduled.

Here is an example template, which is the default guest scenario.

4. Defining a schedule for the new scenario to operate on

Each scenario requires its own scheduled task on the machine where the bot notification service is located.

The bot notification service only processes 1 scenario, which is detected by a parameter passed into the service. This is why, once the ARM template has been deployed to a machine, there will be 4 scheduled tasks, all configured and set up to point to the scenarios configured in SQL. As seen below: 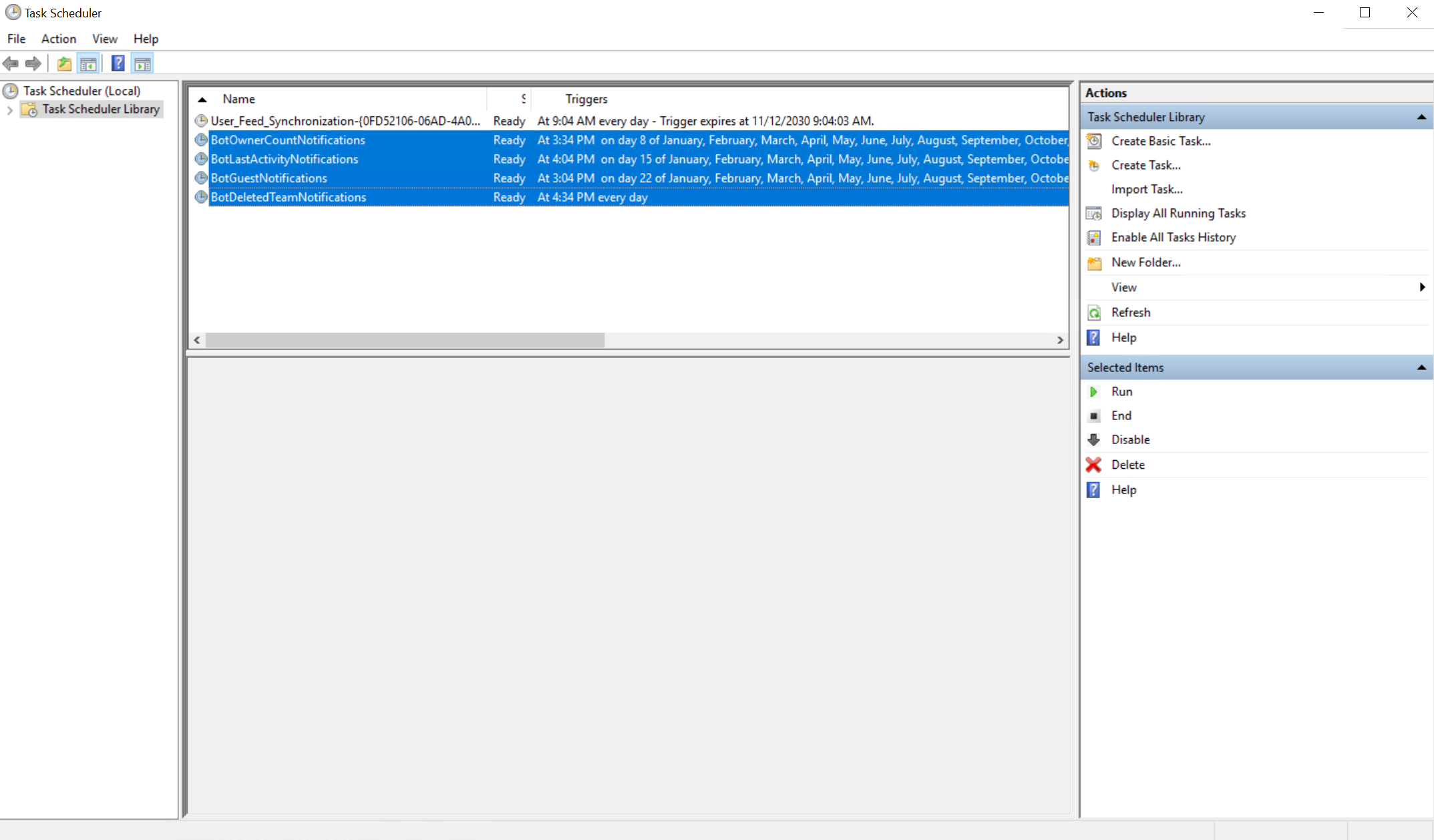 Create a new scheduled task, copying the executable path from the other scheduled tasks. The only difference is that you will need to enter in the scenario name value that you gave within the SQL DB. To do this, follow these steps:

Make sure the task has "run when there is no one logged in" set.

Ensure that the name matches exactly the same as the "name" column that you added into the Scenarios SQL table.

Pay close attention to the scheduled times which you set-up for your task, take into account what your custom stored procedure is doing (for example, is the data over a specified amount of time) and set a reasonable time to run, also consider the remaining tasks scheduled times.

Follow all the steps above should now mean that any user that meets the criteria for your scenario will receive a Teams IM when ran at the configured time.

If you wish to test your scenario immediately, simply connect to the machine where the scheduled tasks are configured and run the task. However, bear in mind that if all configured correctly - the users will receive a Teams IM.

There is a cap in the notification service that only returns a max of 35 teams, per user. This is due to restrictions of Bot Framework message sizes.

Each notification can contain a maximum of 35 teams, if there are more than 35 teams, only the first 35 will be included in the notification. This is due to a restriction of bot framework message sizes.

A single adaptive card template is used to generate the message sent to Teams. This means they look very similar when viewed in both.

Was this article helpful?
Thank you for your feedback! Our team will get back to you
How can we improve this article?
Your feedback
Comment
Comment (Optional)
Character limit : 500
Please enter your comment
Email (Optional)
Email

By entering and using this site, you consent to the use of only necessary cookies to enhance your site experience and improve our services.